Many people think that reactions to spider bites are something that only happen in far away hot countries with more overtly dangerous and venomous creatures, but common British house spiders, and small insects, can cause major reactions in both people and dogs. I feel this is certainly something everyone should be aware of, maybe even to the point of keeping this article to share with your vet if needed.

Our first experience of a spider bite was about 5 years ago when we were fostering 2 Rescue Bernese prior to re-homing. On waking up on Sunday morning I heard a little pathetic whimper coming from the kitchen and on going down stairs found the young male Barney had a tiny slightly raised mark a bit less than the width of 5p on top of his nose with a tiny abrasion in the middle. I assumed one of the girls had told him off and just caught his nose. It REALLY WAS NOTHING AT ALL and barely noticeable.

We were at a breed show that day and took the two rescues along for the experience. By lunch time Barney’s nose had continued to swell and had doubled in size to about a 10p and started to weep a partly bloody discharge. People were starting to ask “What’s wrong with his nose?” as it was becoming impossible not to notice it, all within just a few short hours. At this point, I rang our vets and made a last appointment of the day to call on the way home. (We are very lucky to have a veterinary surgery that has almost normal surgery hours on a Sunday). By teatime we had spent the afternoon being amazed at the speed of development. By the time we arrived at the vets it had bright red raw flesh erupting through the skin and the vet, although not entirely sure, diagnosed it was probably infected wet eczema and prescribed fuciderm cream and antibiotic.

The next morning (Monday) we were back at the vets as it had deteriorated significantly overnight and added another antibiotic and a similar increased deterioration happened by day 3 and it was getting worse by the hour. 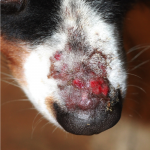 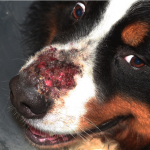 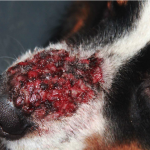 At this point Barney’s nose was very swollen and very angry CONTINUING TO SPREAD RAPIDLY and Barney had also developed similar, but smaller, open weeping lumps on the edge of his ear flaps and subsequently along his mouth lips and in his eye brows.

He was clearly in immense pain and crying lots of the time and day 4 again brought further deterioration with the inflamed area rising upwards and becoming more pronounced. Normally a very passive and compliant dog he cried and squirmed when you tried to apply any cream to ease matters. All the fur was gone from the affected area, it appeared completely raw and was clearly as painful as it looked.

At this point nothing was working, the vet was at a loss and in desperation we began to wonder if this was a rare form of rapid cancer or something similar so Steve sent an email and photographs to the Head of Oncology at Cambridge Veterinary University (who he had known for years). The immediate response was that it definitely was not any form of cancer and she had never seen anything like it but had forwarded the email to head of Dermatology.

Barney obviously wasn’t bothered by the appearance but he was clearly in significant pain but the next morning (Day 4) our prayers were answered, with a definite diagnosis from the specialist at Cambridge who we will always be grateful to. He advised Barney had Eosinophilic Furunculosis, which is commonly the result of a spider or small insect bite. Basically, this is the dog’s extreme reaction to a normally harmless and usually unnoticed bite.

By this time Barney’s nose was horrific, but the good news was that it was easily treatable as it was STEROID RESPONSIVE, but it did not respond to antibiotics or other topical treatments. He actually asked if he could use the progressive photographs of the condition in the future.

An initial steroid injection to kick start the treatment followed by steroid tablets had an immediate result of halting the progression but by this time there were significant multiple open wounds within the swollen area and antibiotics were utilised to help prevent secondary infections but the area began to change from raging red to relatively calmer looking pink and the swelling began to subside.

Once under control the next part of the treatment was based on MY OWN personal experience and preferences, NOT specific veterinary advice. I have used a product called CAMROSA OINTMENT for years and not only is it a wonderful healer it also promotes hair growth and I have personally had some incredible results with dogs when all else has failed, so now I frequently just go to it as first choice.

If you go to their website to have a look at Camrosa it is useful to look through all the pictures in the different animal categories as this will give you an idea of the wide range of results you can expect. Just be warned it is greasy, rather than a water based cream, Stephen describes it as brown Vaseline and it does look a bit like engineering grease. I just applied it generously twice a day using a cotton bud, and Barney was more and more accepting of this as the days went on and his pain eased. 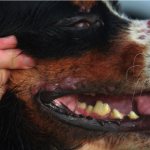 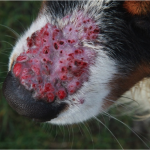 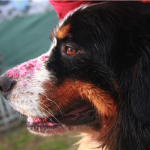 Since Barney we have had another spider bite at home about 3 years ago but I knew instantly and he only required a couple of days on steroids and did not acquire any scarring because it was not allowed to develop. It’s certainly not just our house and Barney’s experience is not a one off as I have picked up three or four pleas for help via Facebook in the last six months or so, not all Bernese. All of them very clearly to me the same as Barney’s case and the result of a spider / insect bite. The main indicator being the SPEED of the symptoms developing and progressing. I cannot stress enough that this SPEED is one of the key identifying features. Most vets including my own practise with about 12 vets and other vets trying to treat dogs (as reported on Facebook) and even some senior vets at the university, had no idea of what it was and had never treated it before. 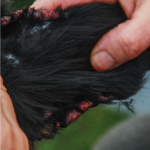 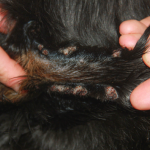 Sadly when answering pleas for help many vets seem reluctant to be advised what it is despite me sending photos / information papers, choosing to stick to antibiotics and waste time doing biopsies. You must “INSIST on steroids” nothing else works and wasting time will only make the dog’s suffering worse and ultimately the scarring worse. As with the speed of the condition progressing, EQUALLY speed of treatment is just as essential or your dog may finish up suffering and scarred like Barney, in JUST 5 days from an almost undetectable pea size scratch to all his muzzle and other areas around his head. At least make a note of the name of this condition, Eosinophilic Furunculosis, even if you do not keep this article and you can then suggest it to your vet who can look it up for themselves. Time really is of the essence. 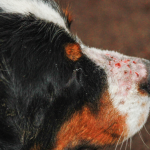 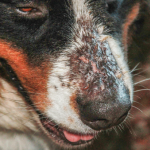 A copy of this article CAN BE DOWNLOADED HERE for future reference.